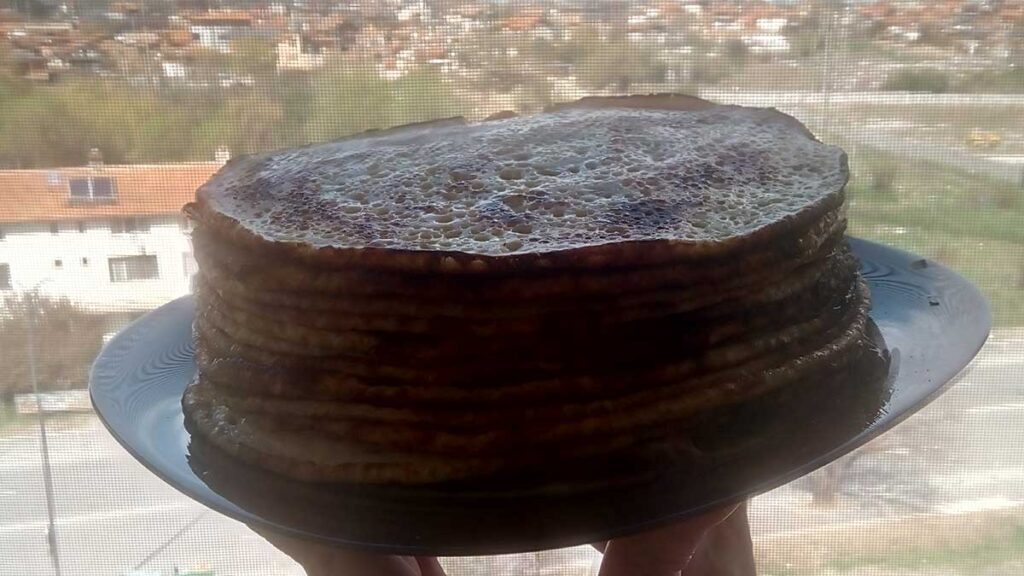 My father told me how in a gypsy house in Yambol a young gypsy woman fed him gypsy katmi and there he learned to make them too. That’s why I named them “Gypsy Kathmas“.

What exactly he was doing in this gypsy house with this gypsy woman we can only guess. I never thought to ask him…

I have learned from him that the main instrument of labor for these katmas is the so-called “gypsy sach”. At that time I had never heard this word at all and for a long time I thought that sachs were only used for cooking katmi.

Another interesting thing, again learned from him, is that the sach is not washed. Well, he was a “zevzek”, I don’t know how true that is, but I took it at face value at the time as I was helping (watching) him make the hearth katmas in the village (Malak Chiflik, Veliko Tarnovo). Then I decided that fire is enough for disinfection 😉 and cleaning.

In any case, I have never eaten such katmas as those prepared by him or my mother on a gypsy sach on the embers in the hearth.

He told me about the gypsies and the fire and other things that I didn’t really understand then, but now that I think about it, they make me laugh.

He doesn’t put any fat on the sacha, and when it gets hot (the sacha is made of cast iron), he smears it with a piece of bacon stuck on a fork.

Katmas are not tossed like pancakes in the air, perhaps for the simple reason that the cast iron sach is quite heavy. But they are easily separated from it with a wooden or other “spatula” or as they call this flat household tool. The moment of reversal is easily determined – by changing the color of the entire katma (the mixture darkens slightly, but distinctly enough). Baking the katmata on the other side is done in the ceiling way – you look at the ceiling and when you decide that it is ready, you remove the katmata from the sacha 😉 – it usually takes less than a minute.

I made them on a gas stove, but honestly, it works on an electric one, too. It is not a mandatory ember, and not everyone has the opportunity for it.

The ready katma are arranged in a suitable plate and lightly smeared with fresh oil on the upper side, and the next katma on its lower side takes over from it.

Katmas are not made like pancakes, although they have similar ingredients. They are made with yeast and the mixture must rise first.

For about 16 pcs. katmi are needed:

Note that they are quite filling. I’m a big person, almost 100 kilos, but two katmi with honey are enough to fill me up, and on the fourth I’m already moaning “I can’t take it anymore” 😉.

I used to mix them by hand, now with the availability of a blender I decided to make them with it and there was no problem (however, the blender must be about 2 liters to be able to collect all the ingredients). They don’t become quite authentic, because the gypsy woman probably didn’t have a blender, but it’s more convenient and faster.

Add the flour. A little, to make it easier. Stir constantly.

When it rises enough to use, it at least doubles its volume, so

If you often make pancakes, keep in mind that the ladle should be 2-3 times larger than the one for pancakes – more mixture is poured into the ladle. Katmas become 2-3 times thicker than pancakes of the same diameter.

Katmas are certainly not the healthiest dish, but they are damn tasty, especially if they are made with love.

However, since the filling can be of your choice, a healthy balance can also be achieved. They don’t have to be eaten with honey or jam. They can be made with Formula 1 skir and shake mix, skir and PDM, flavored cottage cheese with Formula 3 protein powder, or another suitable high protein mix to offset the carbs and fat. And some sport to burn the calories 😉.

The macros for 1 pc. katma are shown in the table. I have calculated them for the products I use. They may differ for you, mainly because of the content of fresh milk and the type of flour. But they can still guide you to make an optimal balance of 30% fat, 30% protein, and 40% carbs with the filling (in terms of calories, not weight! – I’ll remind you how many calories the various macronutrients are after the katme chart).

Amount of main macronutrients for 1 cathma:

I included the alcohol for luxury, not because it’s a macronutrient. To remind us how many empty calories we consume with each cup.

Enjoy! And let’s not forget that proper nutrition is the basis of strong immunity.