It is Sunday. Galya is still sleeping tired after yesterday’s very fruitful but tiring day. What can I do to pleasantly surprise her?

I’ve already made nearly a liter of tea for both of us and when he wakes up I’ll be able to buy some time.
I haven’t made pancakes in a while. I don’t want traditional pancakes.

Instead of a shake, for breakfast I can try some of their healthy options.

I looked at what products I had and the experiment began. 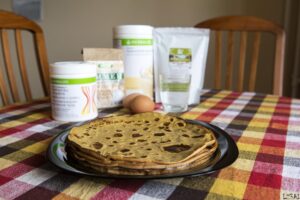 Naturally, in your favorite blender:

I gave it a stir, waited a bit (the chickpeas thicken a bit after that) but it seemed rare to me and added 1 scoop of F3 protein powder.

A bouse-like mixture was obtained. That was my goal.

With one small scoop of this mixture, I made 10 pancakes. The first and last are for the craftsman, of course… for aesthetic reasons.

For the filling, everyone can improvise. For example, a thick chocolate shake, an apple with cinnamon or another favorite shake. And maybe something salty.

For the fans of counting calories and grams, I also put together a table with the approximate content of the main nutrients in one pancake.

Of course, there are many other, extremely useful substances in smaller quantities that are not included in the tablet – for example, there are 2 g of choline in the mixture – a substance very useful for the proper development of the brain, useful for pregnant and lactating women, and others .

I don’t know if we’re smart, but these Chickpea Flour Pancakes were so delicious and almost gone!