Home Herbalife Nutrition Products Basic products Shake What Milk Should I Use to Prepare Shake Formula 1?

What Milk Should I Use to Prepare Shake Formula 1? 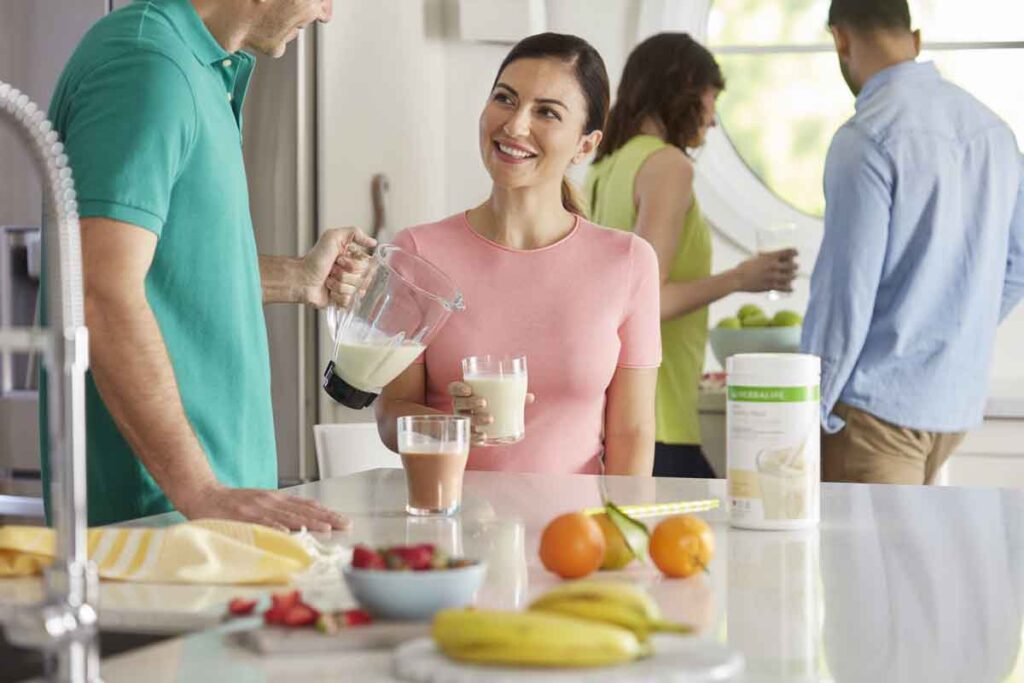 What kind of milk should I use to prepare Shake Formula 1?

If you don’t have a nutrition coach, it makes sense to read the label and do what it says – the shake portion is prepared with 250 ml of semi-skimmed cold fresh milk (1.5%). With it, the kilocalories become just over 200 and the shake meets the definition of “meal replacement”.

A personal trainer is a huge advantage for anyone who buys a shake from him, rather than somewhere on the Internet or a questionable seller with lower prices. The trainer, for example, will show him several alternatives to this milk and explain to him which option and why he recommends it personally for him and his case. The tag option is the most general and most likely not the best option to achieve the specific goal.

Here are some of the possible alternatives:

Each alternative has its advantages and disadvantages, depending on the goal, age, gender, health, nutritional needs or personal taste preferences.

For example, if someone needs to lose weight, the focus in the qualities of the milk used would be calories, amount of protein and calcium. If he aims to improve his immunity and health, he must maintain a certain balance of macronutrients B1 and micronutrients, and the caloric value is not such an important parameter. If he needs to gain muscle mass, the focus is elsewhere. And all this depends on the current body structure of a person, his current lifestyle and set goals. It is almost impossible to give general recommendations, and with general recommendations the results would be far from good, no matter how high-quality and effective the products themselves are.

Let’s look at the composition of the various alternatives. 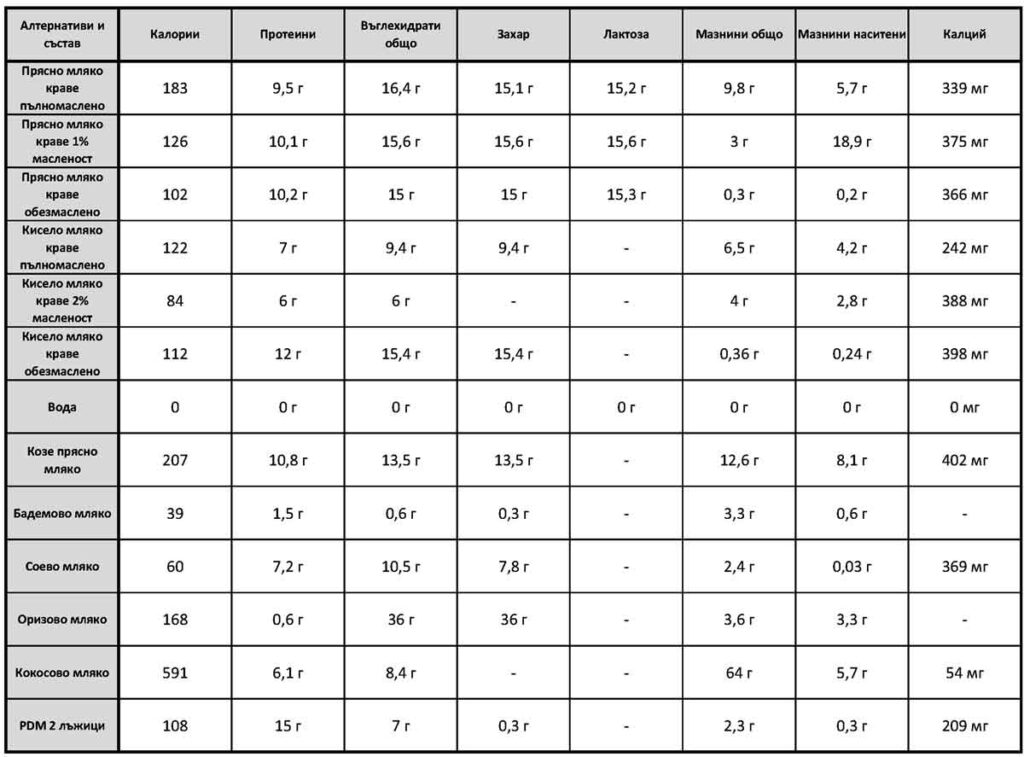 It contains a lot of calories and a lot of sugar and is still not the best for people who want to lose weight. Again unsuitable for the elderly due to lactose.

The calories and fat are in the right amounts, but it still contains a lot of sugars and lactose, making it unsuitable for certain groups of people. Often there are quite a few inappropriate ingredients due to the technology of total defatting.
As far as I know, there is also lactose-free fresh cow milk, but I haven’t been able to find it where I shop. It would be suitable for older people, but it worries me that in order to remove the lactose, there will be a technological residue of unsuitable ingredients. But let’s leave the theory to the specialists and focus on availability and practical use.

As a general disadvantage of fresh cow’s milk, I will note the fact that they contain lactose and its protein is an allergen for many people of all groups.

With a lot of calories and a lot of saturated fat, but there is no lactose and it is suitable for the elderly and athletes.

Low-calorie, low-fat, low-sugar and lactose-free. From sour milk, it is one of the best choices for maintaining good health and successful weight control. Unfortunately, his proteins are also less.

Not the lowest in calories. Its only advantage is the small amount of fat, including saturated fat. However, there are often quite inappropriate ingredients due to the technology of total defatting. Also, the absorption of some vitamins can be reduced precisely because of the lack of fat.

Obviously, of the sour milks, the one with 2% fat content is the most suitable and we most often recommend it. It does not contain lactose and is suitable for all ages and genders. Unfortunately, there are often milks on the market that are not produced in the normal way and cause stomach problems and discomfort.

In such a case, especially if the goal is to lose weight, we recommend that the shake be made with clean cold water. The only thing to keep in mind when using water is that the calories drop to almost only 100 and the protein is quite less – there is a chance that the water shake will not be enough and one will get hungry quickly, but there is a solution to this problem, even a few – the easiest is to add a larger amount of shake or additional protein powder F3.

This is also a very good alternative in terms of nutritional value, but keep in mind that its caloric content is much higher. It is common knowledge that goat’s milk is closest in composition to mother’s milk.

Almond milk is made from ground almonds and filtered water. It may contain starch and thickeners to improve its consistency and shelf life. Almonds can be an allergen for some people.

Of the nut milks, it is the lowest in calories and contains very little saturated fat and carbohydrates, but unfortunately, a large part of the almond proteins is also lost in its preparation and it contains little calcium. Another disadvantage is that it is quite expensive, but it also contains a lot of micronutrients. However, it also contains substances that cause digestive problems in some people. Suitable for vegans.

Soy milk is made from soybeans and filtered water. Like other nut milks, it may also contain thickeners to improve consistency and shelf life. There are many soy beverages on the market that are different than soy milk and contain various sweeteners, flavorings, preservatives, and other substances of concern.

Some specialists are still enslaved to old understandings about the harms of soy in terms of thyroid diseases and problems with fertility abilities, as well as the potency of men. Our practice shows that the problem with the thyroid gland is more generally in the absorption of the protein, which is in greater quantity in soy, and not in the fact that it is soy. But for this problem there is a solution that the nutrition coach knows. And in terms of potency, who knows how many children we have (5) and how many soy products we eat, somehow it will be hard to believe that soy has a negative effect on fertility and potency.

The soy in Herbalife products is guaranteed not to be GMO and is produced in the company’s own plantations and production plants under extremely strict control and hygiene.

The only downside is that soy can also be an allergen for some people, but we only know this in theory – it hasn’t happened in our practice so far.

Rice milk is made from blanched rice and water. As with other plant-based milks, it often contains additives to improve consistency and stability. Its advantage is that it is almost impossible to cause allergies, and for this reason it is a good choice for people with various intolerances – to milk, nuts, soy, lactose or others.

Its main drawback is its significantly higher caloric value and carbohydrate content, while at the same time its protein content is insignificant. Strongly not recommended for babies, children and pregnant women due to higher levels of inorganic arsenic.

Coconut milk is made from filtered water and coconut cream from grated ripe coconut. Despite its name, coconut is not actually a nut, so people with nut allergies should be able to eat it without affecting their health.

Coconut milk contains many times more calories and significantly more fat than other milk alternatives. It does not have a particularly high nutritional value, and various vitamins and micronutrients are often artificially added to it. Recent research suggests that its saturated fats are medium-chain triglycerides, which aid in fat loss. We don’t yet have enough experience using coconut milk to say anything, but in keeping with the principle of using local products and that saturated fat in general leads to an increased risk of heart problems, we avoid recommending it except in minimal doses for some cooking recipes. It also contains substances that may cause digestive problems in some people.

This is a unique drink that has been available for several months now at the Herbalife Sales Center – Bulgaria.

A portion of it in the amount of milk for a shake is low-calorie (only 108 kcal), contains much more protein (15 g), few carbohydrates (only 7 g, of which only 0.3 sugars) and almost no harmful fats. It can be added to any kind of shake and not only enriches its taste, but also the content with an additional 22 vitamins and micronutrients.

The bottom line is that PDM is the best alternative to milk when making an F1 shake of any kind.

When preparing a shake with PDM, there are also some subtleties that, if you wish, your personal trainer will share with you, and you will learn even more tricks and useful things at the Galanto Club.